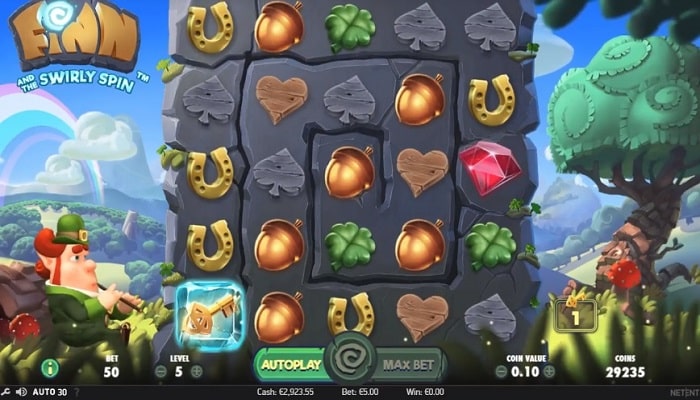 Finn and the Swirly Spin is coming out next month; a brand new NetEnt slot with an interesting theme that seems to possess everything the players may want from a decent Net Entertainment production. There will be free spins a plenty – even more than that, because the game seems to possess a special feature that is built around this bonus specifically. The unique setting of the reels makes the gameplay rather exciting, as in order to win, the magic key must find its way into the door that has been placed in the center of the magic maze, thus making the objects follow in a circular motion. This video slot will be packed with some great content – including special bonuses.

Thanks to all the special features and combinations, it may easily get there and unlock a plethora of rewards that will take you to the next level. Follow Finn, the flute playing Leprechaun, and help him find more treasures that has been scattered around the magical kingdom. Fully animated and enriched with colors, the video slot is going to bring a lot of joy to players and participating viewers alike. Increase the odds of winning by locating the necessary elements, bound to appear on the reels at some point, giving all the more reason to pursue the next set of bonuses. The games is going to arrive no sooner than the 23rd of November 2017, but you can expect more information and footage regarding Finn and the Swirly Spin in the upcoming weeks. Expect to see more of this casino game with an Irish theme, which Net Ent is going to launch really soon. In the meantime, be sure to check out a couple of the latest online slots.