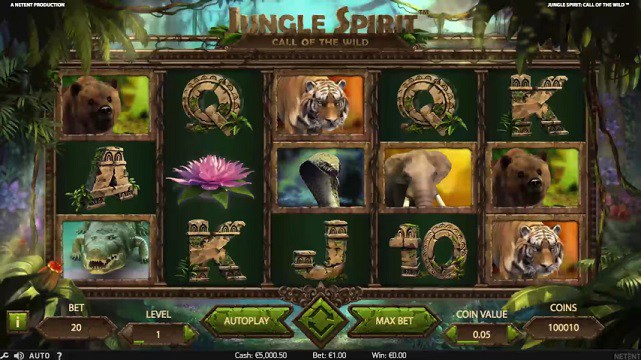 Jungle Spirit: Call of the Wild aims to provide all of the excitement of previous NetEnt slots, combined with multiple new additions and a brand new theme set deep in the jungles of an undiscovered continent. This fascinating video slot might just as well bring a new set of options that can be further used to customize the betting experience and while spinning, increase the potential winnings even further. Such is the case with the many bonuses and free spins, which are already a working form of rewards that appear during the games presented by Net Entertainment in general. Based on 5 reels and the initial 3 rows, the latter feature would expand to a total of 4 while in the free spin mode, enabling an additional channel for tracking the matching combinations. With as many as 243 ways to win, the number can also rise up to even 1024, all due to the expanded ratio of sequenced free spins. Delving into the forgotten lands occupied by wild animals may sound a bit risky, yet nobody will turn down the offer to become instantly rich with a single push of the button. You may expect the game to appear at all NetEnt powered online casino during the next month, as the company has announced to launch its new video slot in March 2017. Features like the Butterfly Boost and Symbol Expansion are certainly going to help as well. You can also find some of the latest updates on new casino games from this particular provided, through the official Facebook page. For more information on the upcoming Jungle Spirit: Call of the Wild video slot, be sure to check the recently uploaded footage on of Net Entertainment video channels or stay tuned for its premiere in the following weeks to come.