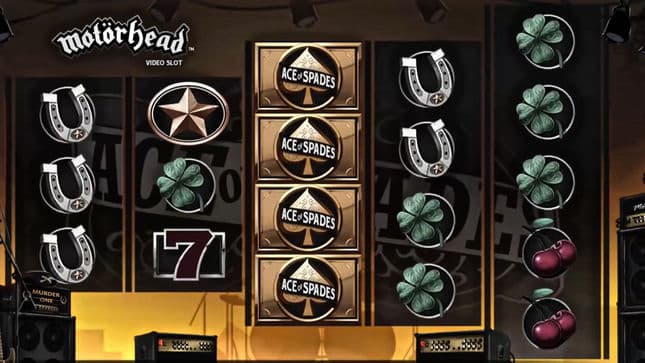 Motörhead is the next in line video slot being prepared by Net Entertainment. This influential heavy metal band has been always ready to rock the public ever since the launch of the band's very first record. Spanning for several decades already, the group is not planning to stop playing their hit songs, along with new material that is constantly being released. The “Motörhead” slot is going to be a third installment in the long running music series of video slots, which NetEnt has started with the “Guns N' Roses” concert and then enriched with the “Jimi Hendrix” experience. It has finally come to the end of this trilogy, yet many are still wondering if there would be more of this incredibly successful genre of slot machines, making Net Ent only more popular with casino players. The Motorhead game is going to be released no sooner than the 22nd of September and there is still a new video slot being released before that, just as the company's monthly release strategy dictates. Fans of the heavy sounds will not be disappointed, as the game features many of the prominent singles and hits from the long running discography, so the gameplay comes accompanied with an audio track in the background. Follow the next installment as it incorporates rather impressive visual components. With this next product from the NetEnt Rocks series of slots, you will find more bonus features than you can imagine. It is rock & roll at its finest, a virtual journey that spans throughout many years of touring and partying on stage. This 5 reels based game comes with 76 fixed bet lines, as well as the Mystery Reel, Bomber Feature, Wild Substitutions and Free Spins. Stay tuned for more info on this matter, plus additional gaming news and updates in the future.