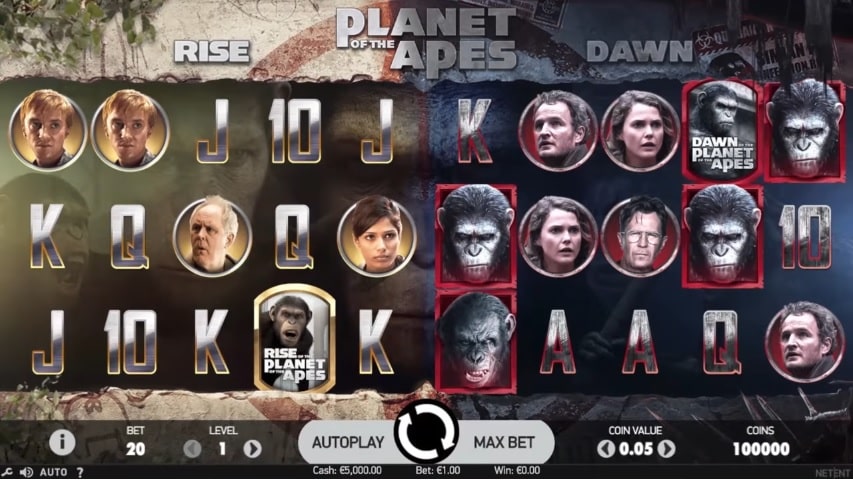 The Planet of the Apes is a series of extremely influential, classic science-fiction films, which were based on a sci-fi novel that dabbled in the problems of humanity and the evolution of other sentient creatures. Thus intelligent apes have come to rule the planet and with such an innovative idea, many fantastic movies had been made and still continue on gracing the cinema during the recent revival of the franchise. NetEnt felt it would be only common sense to make it into a video slot game, as most of other things already were by this visionary studio, adding another piece of software that is going to hit every Net Ent powered online casino in the upcoming month. Planet of the Apes is going to be an amazing slot machine, and from what can already be gathered by seeing the early footage of the game, it features two of the new movies that both share the reels in equal parts. Upon launching the Planet of the Apes slot, the players will be greeted by a 10 reels, 5 inside the Rise part and 5 within the Dawn part. This ingenious solutions pays homage to the two films from the new reboot of Planet of the Apes: Rise and Dawn. Net Entertainment is definitely going to make sure that the fans of old movies and modern cinema alike, especially fans of the genre, can be satisfied with the outcome. Due to the association with 20th Century Fox, it will be a licensed product brings a lot to this universe. Following the life of the main protagonist – Caesar, the players will meet most of the cast from both movies: “Rise of the Planet of the Apes” and “Dawn of the Planet of the Apes”. As always, the video slot comes fully packed with additional bonuses, including the Dual feature, Stacked Wilds, Wild substitutions Scatter & Bonus symbols, and Rise + Dawn Free Spins. Expect to see a lot of action with this game, and check back for more updates or prepare to play it on launch day.