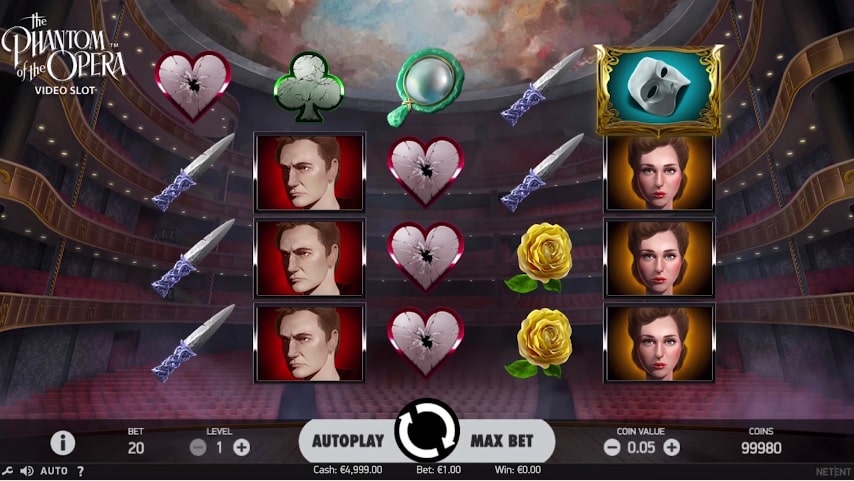 The Phantom of the Opera is another creation that comes out of the partnership of Net Entertainment and Universal Pictures, based on the long running horror movie genre that spawned many classic flicks throughout the twentieth century. This story of the game had been influenced by the popular musical of the same name, which was instead based on the French novel written by Gaston Leroux. This tragic love story unfolds as the reels spin through smooth motion of the animations, showcasing the events that took place in the previously mentioned versions of the tale. To ensure that the experience would be just as rewarding, the slot will have many bonuses. Given that it is a NetEnt game, you can be sure to have lots of intriguing moments here, narrated by the animated sequences that appear after hitting a matching combination of symbols. As part of the Universal Monsters license, The Phantom of the Opera will be the next addition to the series of slot machines, which include previous games like: Frankenstein, Dracula and Creature from the Black Lagoon. To ensure that the gameplay would make for a satisfying casino experience, the software studio is going to embed some additional bonus features, offering an even better result than it could have happen otherwise. The video slot is going to launch this month, on the 24th July to be exact, so you can already count the days before it finally becomes available at all the online casinos out there. This 5×4 branded slot will definitely be something to look forward to, so if you plan on trying it out, then you may check it out soon enough. The company plans on releasing the game to all gambling services that run on Net Ent software, which means that players can pick the one they are already registered with and proceed to the lobby to venture into the world of the haunted opera house with a mysterious past.