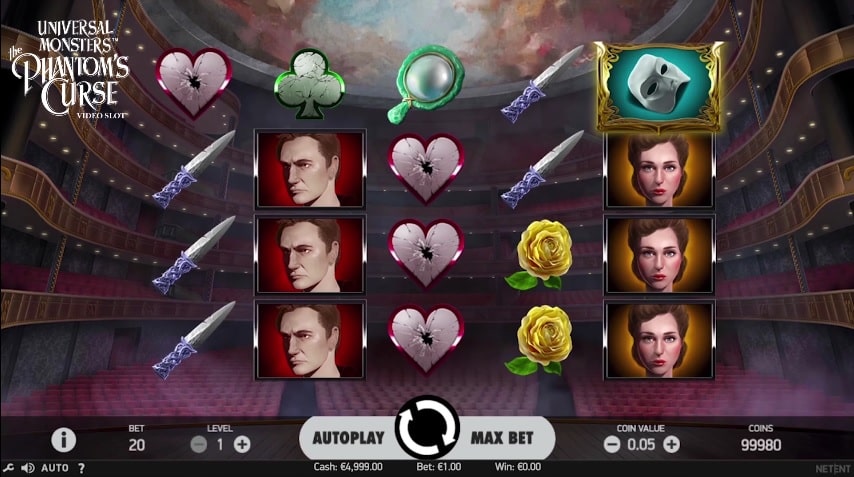 Universal Monsters: The Phantom’s Curse is the game that might as well become a next casino hit, just in time to begin this new chapter in history. Even though it has been delayed a couple of time, due to some undisclosed licensing issues, it’s finally going to launch on the 24th of January this year. If you can’t wait to play this brand new NetEnt slot, then you’re in luck, because there are lots of online casinos to choose from, as most of them are currently powered by the Net Entertainment software. Find out if Christine and the masked Phantom end up together, by spinning the reels and combining the matching symbols that represent objects of the plot. Those already familiar with the Phantom of the Opera film, can await a real treat in the form of an homage to the classic, which was also influenced by the literary masterpiece of the same title. With its Gothic setting that should appeal to the fans of the genre, Universal Monsters – The Phantom’s Curse will deliver all the usual features, along with some unique ones, and of course: tons of bonuses to enjoy throughout the gameplay. If you have been wondering what other aspects of the video slot are going to be present in the final product, then you may want to check out the video footage on NetEnt’s official YouTube channel. Meet the characters and follow the main story, thanks to the vividly animated sequences. Other than that, expect to see a lot of action this month, and collect some free spins while pursuing the Phantom through the dark streets of 19th century France, as well as the backstage of the haunted opera house.