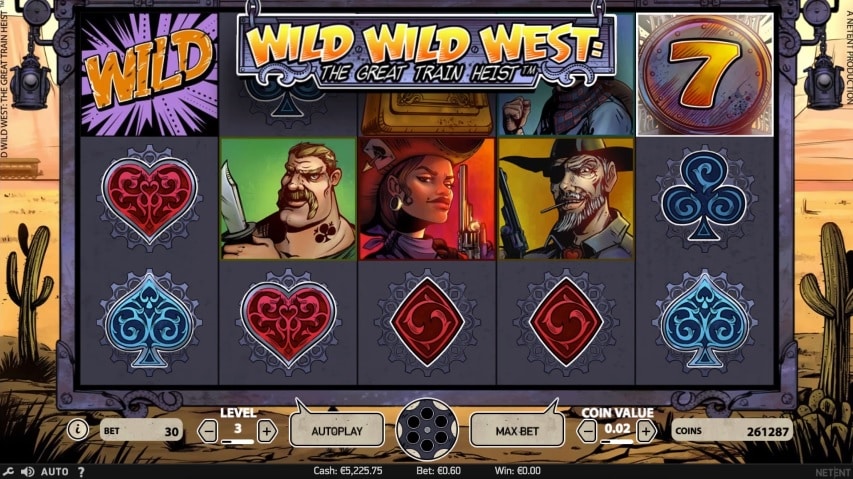 If you thought that NetEnt has already went on a break or focus on the next release for the upcoming month, then you are in for a surprise because even though a new video slot had already been released this month, there is yet another one planned for launch later this month. Wild Wild West: The Great Train Heist, because that is the title of this unique slot machine, comes to online casinos already on the 23rd February 2017, which means that you will be able to play it rather soon. Saddle your horse, holster a gun and expect to meet with the band of misfits at your favorite online casino rather sooner than later. This western influenced video slot has been based in the world of the old west, where only laws of the frontier are going to keep you alive and running, as there are dangers hiding around every corner of the desert. The game comes with plenty of attractive features, including the usual Free Spins, Regular Wilds, Expanding Wilds, Multiplier Wilds, Spreading Wilds, as well as the unique Pick and Click. There are four different characters in this story, each of them bringing a set of skills that might prove invaluable in the heist that is soon to follow. The gameplay is accompanied with sequences representing comic book style animations, while the spinning reels tend to constantly change, thus allowing to match certain combinations and win multiple coins. Those are not the only attractions waiting inside the game, because there are quite many of those, still available during the actual experience. Find out if you got what it takes to rob a train and join the outlaws as soon as the video slot hits the market, which could not be sooner, as there is already a new slot machine planned for the next month. There is already footage of the latest software currently being designed by the studio on its video channels.